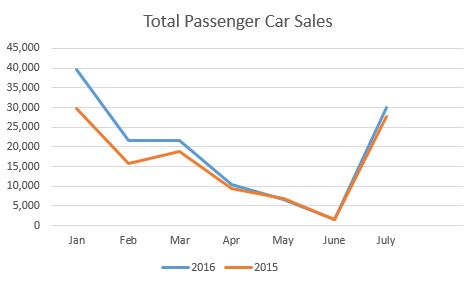 Commenting on the figures, SIMI Director General Alan Nolan said, “The Motor Industry has been working hard to deliver the continuing level of growth in what has been a noticeably more difficult market since June. As we move toward the end of the third quarter of the year the Industry remains focused on business still to be done, with strong offers still available for consumers. In contrast with the era before the two-period registration system was introduced, when sales were all finished in the first quarter, the interest in new vehicle sales now tends to carry to the end of the third quarter, but obviously at a lower rate. We believe the Industry is still on course to deliver close to 150,000 new car sales by the end of the year, indeed new car sales have already generated €1.2 Billion for the Exchequer in VRT and VAT receipts.”

The best-selling car remains the Hyundai Tucson with 7,230 registrations, well ahead of the Volkswagen Golf in second place with 4,681.

There were just 361 electric cars registered this year, a fall of 17% on the same period last year. However, Hybrid Petrol electric cars have increased from 1,290 in 2015 to 2,399 so far this year.

If you’re looking for new lease or rental car contact us today on 01 4605250 or email info@jensenfleet.ie to discuss your options.